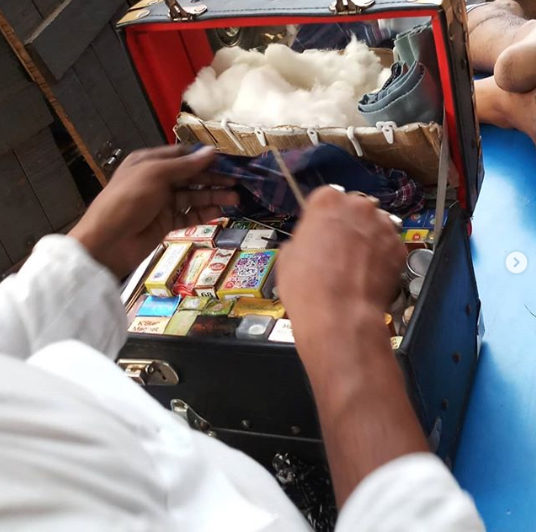 The daily prayer was about to get over. Outside the masjid, stood two surmawalas with their box of tools, containers of surma and bottles of itr. Everyday between 2:30 to 3:30, Ali and Mohammed would wait outside the masjid for his usual clients.

They lived near Brabourne road and had been preserving the age old profession of applying surmas. Surma is a powder obtained from a surma stone and is similar to kohl but not the same.

Application of surma in Islam is considered as an act of respecting the prophet and follow his teachings. While some devotees choose to apply it everyday, some opt to go for it only on Fridays.

Faizan stood next to the surmawala, ready to let Mohammed apply surma to his eyes. With a careful, swift stroke, Mohammed applied surma. A minute later Faiza opened his eyes, red but intense! A line of jet-black surma ran on the rim of his lower eyelid.

Earlier it was easier to find a surmawala in the city of joy, the number has fast dwindled. Having worked for more than two decades, Ali and Mohammed have witnessed the changing landscape. They continue to cater to also their Gujarati and Marwari clients.

The vials of itr often attracts the kids of the locality and for a nominal charge, Mohammed and Ali distribute happiness in the form of soothing scents.

I wasn’t aware about the profession, until a friend mentioned about it to me. An article on telegraph further explained about the dying profession.

All for Rs. 5, the surmawalas of Kolkata are keeping alive good faith and spreading happiness, one customer at a time!

One thought on “Surmawalas of Kolkata”

This site uses Akismet to reduce spam. Learn how your comment data is processed.

who are you reading today?

How’d you rate me?

Translate to my language

How’d you rate me?

Who are you reading today?